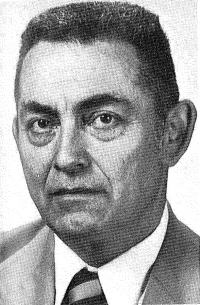 Dr. Abraham H. Epstein, 91, passed away in Bradenton Florida, on June 2, 2017.  He received the B.S. from Cornell in 1952, the M.S from Rhode Island in 1954, and the Ph.D. from Iowa State under Dr. H. S. "Sande" McNabb in 1969.  "Abe" grew up on a farm in Connecticut and spent his early career as a plant pathologist in California and Wisconsin.  He came to Iowa State as the only extension plant pathologist in 1965 while also working on the Dutch Elm Diseases for his graduate degree.  During his career at Iowa State, Abe's primary research focus remained on diseases of woody plants.  Abe became Professor-in Charge in 1976 of what was then known as the Department of Botany and Plant Pathology and was appointed Chair of the newly-formed Department of Plant Pathology and Weed Science in 1979.  During his tenure, he oversaw the hiring of six new state-funded faculty members which led the Department's direction towards increased focus on molecular aspects of Plant Pathology. Of these positions, four were replacements and two were new. This was regarded as a significant accomplishment during that time as major cutbacks in funding were occurring in the College of Agriculture. He also helped to direct the hiring of one federally-funded position.  After saying that 11 years as Department Chair was long enough, Dr. Epstein stepped down in 1990 and assumed leadership of the oat project and biological control of multiflora rose until his retirement in 1999.

An important concern of Epstein's was people with the human element being highly important to him.  He was loyal to the personnel that he led including the support staff.  He was active in the Iowa State chapters of Gamma Sigma Delta and Phi Kappa Phi, and, in 1982 and 1983, was elected Vice President and President, respectively, of the North Central Division of the American Phytopathological Society.  Abe received the Distinguished Service Award of the North Central Division in 1994.  He was a Fellow of both the Iowa Academy of Science and the American Association for the Advancement of Science.  Dr. Epstein served as a board member of the Bickelhaupt Arboretum in Clinton, Iowa.

Dr. Epstein had numerous interests outside of Plant Pathology.  He was an avid gardener and known for his 'asparagus patch.' He was a brakeman on the Boone and Scenic Valley Railroad, a tourist railroad in Boone, Iowa, a member of Kiwanis, and both an airplane and glider pilot.  He was a founding member of the Ames Jewish Congregation of which he was also President.  Age was not a deterrent for Abe for in his eighties he was an active participant in a 'Zumba' class in Bradenton, Florida, where he and his wife retired. He is predeceased by his daughter Beth and survived by his wife Doris, and a daughter, Emily.

Category:
About
Tags:
In memoriam