Dr. Sally Mallowa, who recently completed her PhD in the department studying with Dr. Alison Robertson, was recently involved in an effort to develop a teaching tool and extension workshop in Kenya and Uganda this summer. The team came from five different institutions, and was funded by a Global Experience Award from the APS Office of International Programs. The teaching component focused on developing a case study resource for learning about cassava brown streak virus disease (CBSD).

Developed for undergraduate students, the case study was tested at four universities in East Africa: Makerere Univeristy (Uganda), Chuka University (Kenya), Kenyatta University (Kenya) and University of Nairobi (Kenya). The case is set in an African village where growers, extension workers and researchers work together to deal with an outbreak of CBSD. The extension component of the project hosted a CBSD workshop for fifteen extension workers in western Kenya.

APS – Office of International Programs 2015 Global Experience Award
The multi-institutional team that won the 2015 APS-Office of International programs - Global Experience Award included colleagues from five institutions.  The team developed an undergraduate case study teaching resource on cassava brown streak virus disease (CBSD).  The case is set in an African village with growers, extension workers and researchers dealing with a disease outbreak. The case study was tested at four universities in East Africa [Makerere University - Plant pathology 26 students (Uganda), Chuka University – Agricultural Education (14 students), Kenyatta University – Field Crops Management (63 students), and University of Nairobi – Virology (30 students) (Kenya)] in June 2015. The case study was student centered and utilized videos, small group and class room discussion and role playing in presentation of discussions to the class.  More than 90% of the students were new to this form of instruction, however they really enjoyed it and recommended one or two case studies a semester in other classes. The case study is intended for publication in the Plant Health Instructor an online educational journal so that other instructors all over Africa can access the case study. In collaboration with Donald Lee of the University of Nebraska Lincoln we intend to develop an online version of this tool so that students from anywhere in the world with access to internet can benefit from this tool. We also conducted a field diagnostic workshop on CBSD for 15 extension workers from CBSD affected areas of western Kenya).   The team will also share about this experience at the APS annual meeting in Pasadena, California in August 2015. Sally Mallowa also won a NEXTGEN Cassava Early Career Female Scientist Travel Award to attend the World Congress on Root and Tuber Crops (WCRTC) in Nanning, China, October 2015, to present a poster on the workshop and an oral on the case study.

Sallys Note:
Instruction of students in agricultural and agro-ecological sciences in the next decade is focused on interaction and creating real world scenario activities that students can relate to think through and learn from. It was an honor for me to translate and share the value of the things I had learned during my PhD. with students in East Africa. Though most students were unfamiliar with this form of instruction, they were very excited about it, and the presentation got a life of their own and students were role playing and it made for very lively discussions in class. I must say the students came up with solutions we had never considered while writing the case, because we were thinking of solutions in the context of plant pathology. One group said they would ask the World Bank for disaster relief funds and money to sue providers of diseased planting material!!

At the end of the case study at each University we took a group picture, however at Nairobi University after humoring me and posing  for mine, the students said to me “ Madam, we are not a choir!!” and proceeded to take a group selfie! I actually like it better. Many of  the students wanted to know how I ended up at Iowa State, and it was an honor to wear my red department polo and talk about our  school and our department (What a fantastic idea! That shirt was).

The team of extension workers we worked with were knowledgeable and experienced (over 20 years for most participants), however  half of them thought CBSD was bacterial and were excited to learn about the disease triangle while we were excited to be able to  justify our workshop! 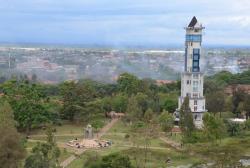 An interesting connection with Kenyatta University (KU), is that the President Dr. Olive Mugenda is the first woman President of a University in Kenya and a Distinguished Iowa State Alumni. She has done amazing infrastructural things at KU from her experience at Iowa State. The Alumni Center, the Kenyatta University Shuttle (Cyride) and the KU campanile, (which opened up June 1 2015 to the public for $1.5 for a visit) jump out at you. She has certainly taken the Cyclone Experience to a whole new nation!