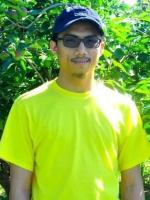 I am from Malaysia, currently pursuing my PhD study at Iowa State University. I received my Master and Bachelor degree in Plant Pathology and Microbiology back in Malaysia. It is such a great opportunity to be here and to learn new things in a totally different educational system and environment to what I have experienced in my country.

The goal of my research is to elucidate Peltaster species, a genus containing several fungi in the sooty blotch and flyspeck fungi (SBFS) complex. SBFS fungi establish epiphytic population on the waxy layer of apples and other pome fruits, causing dark blemishes on apples and downgrading the quality of the fruits in the market. I will explore variability within the SBFS species of Peltaster in terms of morphology, physiology and gene sequences. Incorporating morphological (colony appearance, growth rate, conidial shapes and sizes) and physiological characteristics (fungicide sensitivity) with molecular analysis (ITS and TEF gene sequencing) will strengthen the process of defining the fungal taxa.

I will conduct fungicide sensitivity testing on several SBFS taxa as well as Peltaster spp. Previous studies have documented that different species of SBFS fungi showed significant variation in mycelial growth response to media amended with thiophanate-methyl and ziram. I will add another three fungicides that are commonly used to manage SBFS infection: Captan 80 WDG (captan), Flint® (trifloxystobin) and Fosphite (potassium salts). This analysis is important as to get a clearer picture of differential fungicide sensitivity among SBFS fungi, which could have important consequences for management of the disease, e.g., selecting the most effective fungicides to use.