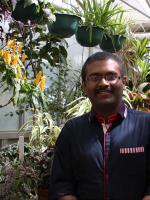 I am a second year graduate student in the BCB program. I joined Dr. Roger Wise's lab after successfully completing my 3rd rotation in the lab. The broad objective of the lab is to decipher infection kinetics between Barley and the fungus Blumeria (5874). My research is focused on discerning how gene expression in Barley is influenced in the presence of the fungal pathogen at different stages of infection. We are taking an approach to mine promoter binding information to construct gene regulatory networks to help bolster our understanding of the underlying kinetics of fungal pathogenicity.

After finishing my BTech from IEM, in 2012, I joined the prestigious Jadavpur University to pursue my Masters in Engineering which focused on Protein Secondary Structure Prediction wherein I applied machine learning tools to predict the three class secondary structure of a protein.

In the latter half of 2014 I got the opportunity to work as a researcher in CMATER labs at Jadavpur University. During this time I extended on my research conducted during my masters and was mainly concerned with deciphering non-kinase specific protein phosphorylation.  From the beginning of 2015 I have been actively involved in teaching as well. During this time I have also presented my research at three conferences in India.

My first breakthrough came when I was given the responsibility to guide students pursue research at IEM. The institute boasts of hosting an international conference at Vancouver, Canada on 15th Oct 2015. As a mentor I took the charge of channelizing the talents of students and pave their career in active research. Being the Program chair of the said conference I also reviewed a myriad of research papers.

Since January 2015 I was an Assistant Professor. During this time I have worked on unraveling the physicochemical properties which influence Protein-Protein Interaction (PPI) prediction. Designing drugs, which can influence PPI, is a fascinating task which I wish to undertake since it paves the way for curing diseases like cancer, Alzheimer’s and AIDS.

Protein function prediction has been one of my areas of interest and I have very recently started to explore it. I am interested to build models that takes into account protein sequence and structure in order to infer protein functions. During my second rotation I have worked on removing bias from a protein function database under the supervision of Dr. Iddo Friedberg.

Though I have worked in proteomics I am also open to the option of exploring genomics as well. Deciphering the different factors (like homology, structure etc.) which can help in understanding gene function, is really interesting which is why I wish to delve into the depths of the same. In my first rotation I was introduced to Genomics. This was my first introduction to Next Gen Sequencing and I thoroughly enjoyed the rotation under Dr. Geetu Tuteja.

One of the major problems which I faced was the sheer volume of data we had to work with. To adjust with the available computing resources a lot of data had to be pruned. I am interested in developing algorithms which can be implemented in the Big Data paradigm. This can undoubtedly speed things up without compromising the data.

In free time I love listening to music. I am an avid admirer of Rabindrasangeet which happens to be one of the most celebrated genres of Indian music.